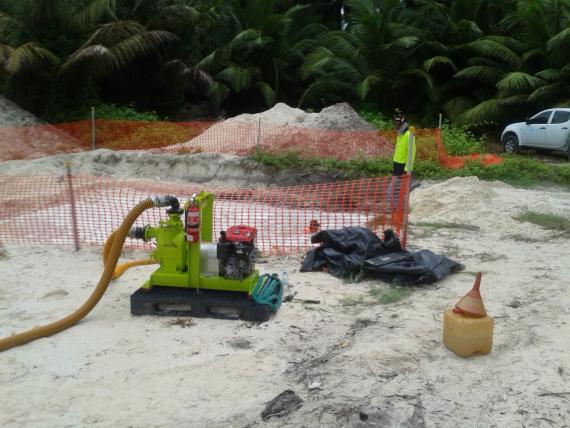 The Cocos (Keeling) Islands are a remote territory of Australia, based within the Indian Ocean. They are two coral atolls made up of 27 tiny islands, of which only two are inhabited. They are situated 2750km northwest of Perth, approximately midway between Australia and Sri Lanka, closest to the Indonesian Island of Sumatra. The tiny community of just 600 people have lived there for more than 150 years.

During the cyclone season, the Islands are battered by strong winds, high tides and the erosion of sand. This has a high impact on the island and its landscape. To combat this, it was crucial that they obtained a tailored pumping solution to pump seawater and sand to fill bladders and sandbags. These were used to build a wall to protect the beach from erosion during the hurricane season. Doing this protected the infrastructure and the islands themselves from being badly battered by the cyclones.

Due to the remoteness of the islands, the pumping solution had to be smaller scale, yet be powerful enough to pump strongly for lengthy periods of time. As the Islanders had limited resources, they needed a pump that was compact enough to be towed by a golf buggy, as they are the only means of transport on the islands. The Islanders’ unique situation made it difficult to find a solution, until they contacted Allflo.

Once the situation was paired with the right range of pumps, Allflo’s Remko RT50 2” pump was chosen. This pump, coupled with a diesel engine, could provide the power and toughness required for the harsh environmental conditions at hand. The Remko RT50 2” could pump sand and saltwater to fill the sand bags and bladders, allowing the Islanders to build the wall and protect their small Islands.

Before the pumping solution could be implemented, Allflo’s pump had to journey to the islands. The Remko RT50 2” pump was first sent to Perth, from there it went on a four-week journey on a ship going to Christmas Island before finally being sent to and then arriving at the Cocos Islands. Due to Allflo’s extensive experience in various industries and circumstances, the Islanders were reassured that Allflo could deliver the solution that would best suit their needs and environment.

Overall, the Cocos Islanders were very happy with the solution Allflo provided and the service they received throughout their time working with Allflo. The Remko RT50 2” pump easily pumps the sand and seawater, filling bladders and sand bags that are then stacked up along the beachfront, protecting the beach from any erosion from the upcoming cyclones. It has so far been responsible for pumping 2000 tonnes of sand and has filled over 800 bags, each weighing 2.5 tonnes each.

The Cocos Islands are now ready for the upcoming hurricane season and were more than grateful to Allflo Pumps for providing them with a solution that would protect the islands during the harsh and unforgiving hurricane season. The Islanders have stated that the Remko RT50 2” pumps were perfect for the job and that the full experience working with Allflo was positive.