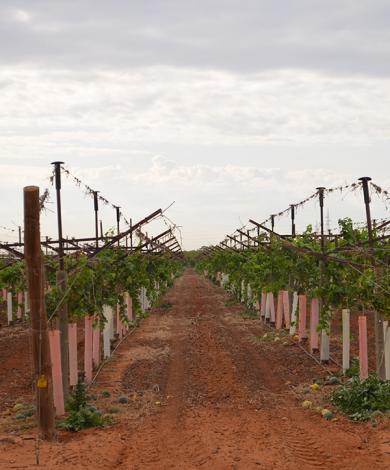 China’s 3rd biggest wine company, Weilong Grape Wine Company have just purchased 3 vineyards totalling 484 hectares in Northern Victoria. The facility currently has the capacity to process up to 26,000 tonnes of grapes per year with combined storage of approximately 20 million litres – with planning approval to expand the facility to process up to 84,000 tonnes and store approximately 60 million litres.

When completed it will be the eighth largest wine processing facility in Australia. The first stage has risen from the red dirt in 12 months and is quite an impressive site. The project worth is estimated at $80 million with total Chinese investment likely to be around $100 million.

The Winery was very keen to be able to treat all their water either reuse it themselves for irrigation of the grounds and gardens and if permitted any excess could be sold off to neighbouring vineyards for irrigation purposes. Allflo Pumps and Equipment have become involved to help Weilong not waste any water that is being used at the winery, this is done by having 12 Remko Trash pumps involved in their waste water system.

Access to water, water rights and irrigation from the Murray River is a hot topic in the Murray-Darling region. So being able to utilize all of their waste water is a huge bonus for the company.

This winery has been specially built from the ground up, which has allowed for the large waste water treatment facility to be built alongside it. This has given the winery the ability to reuse its waste water.

Allflo Sales Engineer Greg Hansen worked together with Linney Engineering Services Pty Ltd that designed the winery and also JJC Group to supply all of the equipment that had been specified for this project. Coordinating with the team in the workshop here at Allflo to bring the project together.

There was a variation of pumps that were selected for the waste water treatment facility which they included; Remko RT-100, RT-080, Remko RS Vortex Pump and dosing pumps.

During the implementation process the winery experienced initial setbacks and delays due to concerns over environmental impacts. Thus their commitment to have such an impressive Waste Water treatment facility on site and its ability to reuse all of its waste water.

As soon as the pumps and equipment arrived in the Allflo workshop it was all hands on deck to get everything ready for dispatch.

The winery started construction in March 2018. There has been a hive of industry working on the site over the last 15 months with many local contractors involved in getting the site up and ready for their first crush.

The winery opened in time for their first crushing season in March. Their aim was to crush 5000 tonnes in the first year. The long term plan is to be able to expand production volume to 84,000 tonnes in the coming years.

The winery has added much needed competition to the local wine grape market which has increased prices for local growers. This is a great boost to the regions grape growers.